Nour – a talented painter and writer 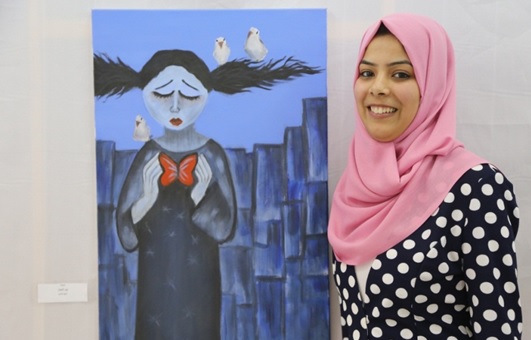 Nour Al Najjar, 17 years old, was committed to attend all the remedial education sessions during the second semester this year 2015-2016. That commitment helped her to acquire the educational skills she needed and overcome the social problems.

Through attending the remedial education sessions, Math in particular, Nour was introduced to self-study techniques which enabled her to search for more exercises to practice and answer. Math teacher Tahany Abu Watfah says: “It was not enough for Nour to answer the exercises I give her, but she was searching for additional exercises and bring them to the session to show me her answers.”

Nour’s improvement and progress was not academic only, but it exceeded that to include the co-curricular aspect as her artistic and literary skills she already has were improving too. Her experience with the Co-Curricular Activities Project last year has shown her talent and creativity. Her paintings and literary texts that were published in “Awal Al Ward” book, one of the project’s outputs, have positively affected her personality, alleviated the psychological pressure she was having and enhanced her self-confidence.  Nour says: “Compared with previous, I can say that my personality has totally changed. I feel much better now and I am ready to give a speech before a huge audience fluently and with much confidence than before.”

Nour believes that her experience with painting has opened the world’s doors widely for her.  She paints what she can’t see before her and writes what she can’t say in reality. Nour Says: “Mustaqblai program believed in my talent and I am sure that I am talented and that’s why I succeeded to produce creative works. Nour’s strong will to change and improve was the main driving force behind her success to accomplish what she is up to now. Her flexibility and readiness to participate in Mustaqbali program’s activities gave her the chance to express herself and release the distress that was overwhelming her soul mainly for losing her father in the Isralei Assault on Gaza in 2008-2009 and for partially losing her mother who lives in a separate home away from her. Nour says in one of her literary texts: “My pen is my bold voice, I might not like my voice when speaking, but I am pretty sure that my writings will connect both the beginning and the end.”